Lamingtons are typically Australian: a cake (like a sponge), cut in squares and covered with chocolate icing and dipped in coconut.
I have wanted to try making them for ages. But it’s always hot on Australia Day and who wants to have the oven going then?
So I gave it a shot yesterday. This recipe is from The Australia Women’s Weekly “Comfort Food” cookbook. And it’s a bit different from your normal lamingtons: the base is a marble cake mix.

I have to say, I was happy with the cake itself , but the icing was a bit of a let down.
I think it’s because I’m not used to eating icing (too sweet for me), but also because I stuffed it up! A bit of a disaster story really! I melted the butter in a plastic bowl over boiling water, ended up melting the plastic bowl too… So I transferred the butter in another bowl with the rest of the ingredients, including cold milk. The end result was grainy and not special. I’m trying to flog it to my neighbours, but no bite yet…and probably even less after reading this!
I will have to try again and maybe go on a lamington quest…
But here it is MARBLED LAMINGTONS. 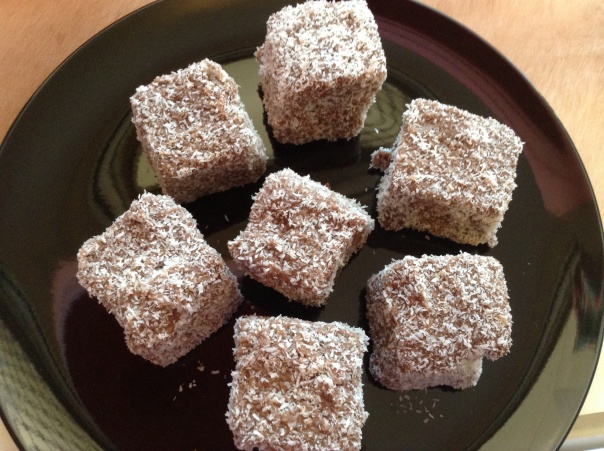 My advice is to use a giant non-plastic bowl so all the ingredients will fit in (there is a huge amount of icing sugar) and keep the icing warm over simmering water. Or melt the butter, add to the dry ingredients and add boiling milk (or water like I have seen since in other recipes). Or better still, make a ganache (melt cream, add dark chocolate) for extra taste and flavour.